Why You (Desperately) Need a Mixing System

One of the keys to sustaining & growing any business is having repeat customers.

If you want to have a career in the studio, then you need to make sure artists come back time and time again to work with you.

I’ve talked to many bands over the years and I often ask about their experiences with other engineers. Sometimes the stories are just shocking.

There’s one common complaint I hear from artists about their past engineers: they took too long to finish a project.

I’ve heard story after story about bands literally waiting months for someone to finish mixing a couple songs. What’s more, and probably not a coincidence, is that usually these long-delayed mixes weren’t anywhere close to what the band hoped for.

From very early on in my engineering career, I set hard deadlines for myself. I didn’t think there was any other option. It blew my mind that I was recording & mixing dozens of songs every month while other engineers in my area would take months to deliver a project. Is it any wonder that bands were leaving them and coming back to me for second, third and fourth projects?

I love getting a peak inside the workflow and process of world class mixers. Guys like Chris Lord-Alge have always talked about how they mix at least one song per day, and often more than that.

Naturally, I want to mimic what top mixers are doing, so I set the same goal for myself. I never really fell into the trap of spending weeks on a mix because I was trying to learn from the pros, and I knew that the pros were not doing that.

Fast forward a bit. I’ve been putting out recording & mixing advice for about about a year and have taught or spoken with hundreds of engineers.

I’ve heard their issues and struggles, and I know where they’re getting stuck.

Here’s the deal: in order to mix quickly, confidently, and with consistently great results, you need a mixing system.

What I mean by ‘mixing system’ is simply a step-by-step workflow, a process that you follow in the same way every time you mix a song.

What keeps people from getting started on a mix? Simple: not knowing where to start!

What keeps people stuck and unable to finish a mix? Again, the answer is simple: not knowing how to tell when a mix is finished.

The reason why the ‘big guys’ can mix so quickly is because they have a mixing system.

They’ve chosen their gear and they know it inside and out. They can move around the console or DAW with their eyes closed because each song is laid out in exactly the same way.

I’ve heard some ‘purists’ complain that systematizing mixing like this isn’t artistic. They say that mixing isn’t an ‘assembly line.’ Don’t fall into this thinking. The truth is exactly the opposite: by systematizing the non-artistic parts of mixing, the mixer maximizes their creativity.

The best mixers in the world all have systems and processes that they repeat on every mix. That’s just plain truth.

Since we have so much information available to us today, we have trouble settling and sticking with something. When it comes to mixing, this means that you’re always consuming more information and trying new approaches in every single mix.

One day you start with the drums. Then you watch a video on YouTube and realize that next time you need to start with the vocals. But then someone else tells you to start by setting all of your levels to some magical gain level first, so you do that.

This just leads to confusion. If you’re approaching every mix differently, there’s no way you’re going to mix quickly or consistently.

Let me break this down more clearly by showing you what it looks like in practice.

When I start a mix, I follow this process:

In the Finalizing stage, I listen from start to finish multiple times and make any last tweaks after each pass. Once I listen through and have no changes to make, the mix is done. Voila!

Notice how steps 2-4 have nothing to do with creativity. This is the boring stuff, the technical set-up work that needs to be done for each mix. These steps could take me hours if I approached them differently every time or scattered them throughout the mixing process. But by doing things the same way each time, these steps take me only minutes and I can even hire someone else to take care of it for me.

I’m now free to mix creatively, without distractions. I can get in the ‘zone’ and stay there.

In my mixing course that I released last year, I’ve been teaching the in-depth, technical mixing stuff like how to use EQ, compression, saturation, automation and everything else to achieve a professional mix. This is obviously super critical.

But after seeing how a lack of systems and processes is holding back so many mixers, I decided to beef up my training and show other mixers how to adopt this mixing system for themselves.

So I documented my entire mixing system in writing and video, and it’s called the M3 Method for Massive Mixes. 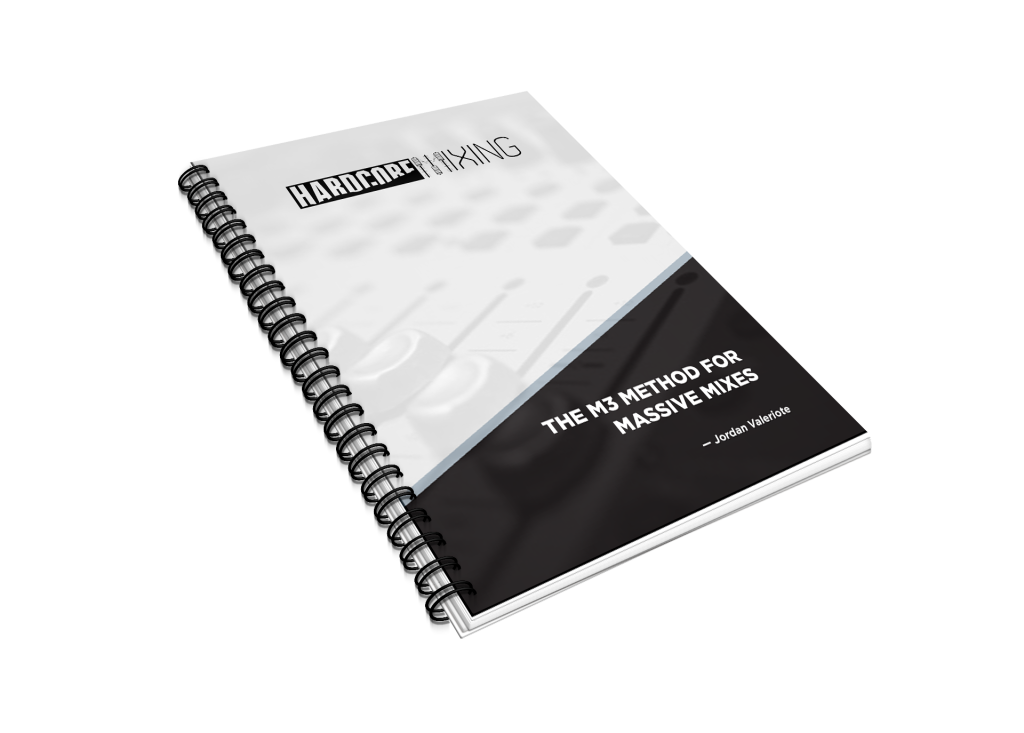 Some of my students have already had early access to the new M3 Method and have found it to be the final piece of the puzzle that allows them to accelerate their mix quality in a big way.

“First off your videos have not only improved my mixing and techniques but my workflow and mindset as well. Routing and bussing channels has become way easier after having the chance to see how somebody else is doing it. I now have created a main template that I plan to always use when I mix a song, with some of my bus presets that I have created and saved ready to use.” -Alan

“The best part of it all is the timelessness of the methodology: you learn a process that is transferable to all production.” -David

“The course really helped me with attacking the mix vs. messing around with individual elements without direction. I now have a plan that I apply to any mix situation that increases my speed, confidence, and overall sound. I have my go-to plugins and I have now setup similar fx busses to yours and they are all ready to go at any moment so I’m not digging through menus and being taken out of the moment. This process has helped me mix more efficiently which has led to more projects and this was worth the cost of the course alone.” -Jacob

The last line of that quote is essential: mixing more efficiently = more projects.

See why this is so important?

I hope this gets you thinking about your mixing process and how you might be fighting against yourself by not having a mixing system.

About 2 weeks from now, I’ll be launching Hardcore Mixing 2.0 – my high-level mixing course which breaks down the entire M3 Method for Massive Mixes.  Oh, and it also walks you through every single track, plugin and mix decision for an actual record label release so that you can see the whole system in action.

If you’re interested in getting your hands on this course, sign up for the waiting list below to make sure you get in first (the doors won’t be open forever). The countdown is on!

How to Get More Stuff Done by Batching Tasks

How to Mix Epic Metal Guitar Solos and Leads

Simplify Your Mix Bus: The Only Plugins You Need